What is mitral valve disease? 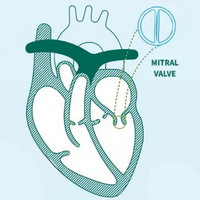 The mitral valve is a valve on the left side of the heart. This is one of the heart’s four valves that help prevent blood from flowing backward as it moves through the heart. When the valve is not functioning optimally blood can leak backwards requiring the heart to work harder or have reduced blood flow and increased pressure in the lungs that lead to heart failure and other conditions. Mitral valve disease can be acquired later in life through several conditions or congenital (present at birth).

Mitral valve regurgitation refers to extra blood flowing backward through the mitral valve and into the left atrium because the valve is not closing properly. The causes could be degenerative with an elongated leaflet or a ruptured one or it can be because the left ventricle is dilated (secondary to a myocardial infarction or a disease of the heart muscle per se) and prevent the leaflet of the valves from closing properly. This makes the heart work harder to move blood, causing an enlarged heart. The lungs could also be affected because of the backward flow of the blood in the lungs causing pulmonary edema resulting in shortness of breath.

This could be progressive or acute depending of the mechanism and can impact quality of life and one’s ability to perform everyday tasks. It can also affect survival.

Mitral valve stenosis occurs when the mitral valve doesn’t open efficiently from the opening becoming too narrow. This results in increased resistance and less blood flowing through the valve. Consequently, pressure increases in the left atrium, the lungs and eventually to the right side of the heart.

The consequences of a mitral valve disease are multiple. To follow are some of the causes and manifestations.

• swelling in legs or feet

Atrial fibrillation, is a consequence of a dilated left atrium that occurs with time following mitral valve regurgitation and stenosis.

Congestive heart failure is when the heart muscles are unable to pump blood well enough to supply the cells with enough blood and requires treatment.

Pulmonary edema can be caused by congestive heart failure. When the blood flows out of the heart, the heart slows and the blood returning to the heart gets backed up, causing congestion in the body’s tissues. This back up in blood vessels can lead to fluid being pushed into the air spaces (alveoli) in the lungs, which reduces the lung capacity, causing shortness of breath.

Cardiac cachexia is weight loss caused by heart disease that may be life-threatening. Heart failure may cause blood to back up into the liver and intestines, which can lead to nausea and decreased appetite.

Congenital are valve conditions that babies are born with, which can cause complications early on or later in life.

Endocarditis is an infection on the inner lining of the heart, including the valves, which can damage the valves.

Heart attacks can damage the heart muscle which supports the mitral valve and in turn impacts the valve functioning.

High blood pressure can lead to the heart working harder and enlarging, which in turn changes the anatomy of the heart and creates stretched tissue and leaky valves.

Use of certain pharmaceuticals over extended periods, such as those containing ergotamine, which are used to treat migraines can cause mitral valve regurgitation.

Rheumatic fever can develop if an infection, such as strep throat is not treated with antibiotics and can lead to damage to the mitral valve, which in turn can lead to regurgitation or stenosis early or later in life.

Trauma such as a physical accident can lead to mitral valve regurgitation.

Treatment for mitral valve disease depends on the current state of health, the severity of the valve condition, whether the condition is worsening and the patient goals.

Depending on the structural state of the valve, the treatment could include medication or a variety of repair procedures including separating fused valve leaflets, connecting valve flaps, patching holes or removing excess tissue to improve the function of the valve. The ring of tissue surrounding the valve can also be reshaped or reinforced to support the valve using a band and known as annuloplasty.

If not repairable, as is often the case with stenosis, the valves can be replaced with mechanical or biological valves.

In addition to the more traditional forms of open-heart surgery, there are also more innovative and less invasive approaches available today, such as mitral valve transcatheter edge-to-edge repair (TEER).