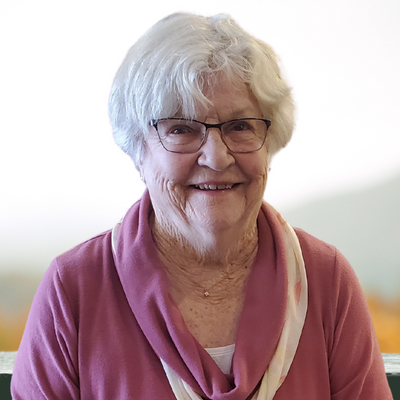 As a young child in the 1930s, Shirley was told she had a heart problem. Although it restricted her, it didn’t stop her from being active.

Later, she understood her diagnosis as a bicuspid aortic valve. A valve which normally functions with three flaps, was functioning with just two, where two flaps were joined together. She was checked by her doctor and told not to worry. Throughout her youth, she was able to participate in many activities, including square dancing, track and field, and baseball. Shirley felt normal.

In her 30s, Shirley kept active playing volleyball. Eventually, her and her husband would raise four children in a busy household. Later, she worked at an insurance agency and embraced the shift to computers and eventually started her own small accounting firm.

As she advanced in age, her aortic valve started losing function. Her cardiologist monitored the extent to which her valve was leaking and advised her not to lift anything heavy.

Later, when her husband became ill, Shirley, now in her 70s, focused her attention on caring for him. While doing so, she did not realize she was also struggling physically. Within a few years, she was lacking energy and couldn’t walk very far. Short distances were becoming more challenging and eventually walking to the elevator was taxing.

At 73, Shirley’s condition worsened, and it became clear she needed a valve replacement. She had a choice between a mechanical or bovine valve. She recalls her doctor explaining the pros and cons including the fact the mechanical valve would ‘click’, require blood thinners and frequent monitoring and as a result, many medical appointments. The advantage of a mechanical valve was that it had a life span of 25 years. The bovine valve has a shorter lifespan, but Shirley would not need blood thinners and constant monitoring. She is still happy with her choice as her bovine valve lasted 15 years.

The valve replacement was a major operation which required opening the chest bone and four to five days in the hospital. She successfully advocated for going to inpatient rehabilitation instead of the standard outpatient rehabilitation as she had concerns about being able to care for herself alone at home.

She recalls holding a heart pillow against her chest to reduce pain and protect the incision as she tried to cough and clear her airways. At her two-month post-surgery appointment, Shirley felt good. She didn’t need her heart pillow and felt comfortable traveling to her doctor’s appointments on the subway.

Within the year, Shirley felt strong enough to travel and made trips to Denver and San Jose. She enjoyed winters in Florida where she started playing volleyball again and took up cycling.

In her early 80s, Shirley lived in a retirement home and stayed active as a hobbyist painter. In her late 80s, and 15 years since her valve replacement, Shirley’s aortic valve was starting to fail.  Feeling short of breath, her quality of life was suffering.  In her condition and at her age, she was not a candidate for open-heart surgery, but she was; however, a candidate for a Transcatheter Aortic Valve Implantation (TAVI), a minimally invasive procedure.

A TAVI is performed by inserting the new valve via a catheter in the femoral artery in the groin and positioning the valve in the heart under fluoroscopic guidance. The replacement valve would be placed inside her natural aortic valve and would expand while pushing the natural aortic valve aside. As a minimally invasive procedure, the recovery is faster than traditional open-heart valve replacement.

Shirley was hesitant to undergo a second valve replacement, feeling she had had a good life and was ready to let life take its course. However, her doctor encouraged her to explore the option.  She let her grandson accompany her to the appointments under the premise she was only committing to investigating the potential of having the procedure. Being a tech-savvy senior, she did online research, which gave her some confidence.

In November, 2020, at age of 88, Shirley underwent the procedure. She was able to stay awake and after post-operative rest, she was able to get up and walk down the hall and return home the next day. She now enjoys playing bingo, euchre, mahjong, and FitMinds, a memory and recall exercise.